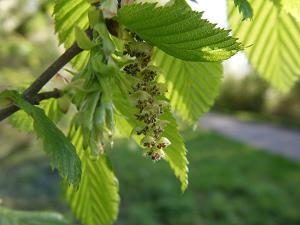 Each of the 39 Bach Flower Essences is what I call a “healing helper” and I regularly use them to help rebalance me emotionally. My focus today is on Hornbeam, mainly because it spoke to me directly at the beginning of last week, but also because its qualities relate to how a lot of people around me seem to be feeling right now. So, let’s take a look at what Hornbeam essence can offer us.

I shall start off by telling you a little about why I felt the need for it, to illustrate its use.

For the past few weeks, I was having trouble with my right knee. I had cut out my regular and much loved dancing to be “sensible”, and over a busy fortnight, in preparation for various events I was running and participating in, I had been doing a lot of sitting on bottom, in front of the PC. I had intended going for a gentle walk each day, but inertia seemed to set in, encouraged by the soggy weather. So, in summary, I channelled most of my energy into mental activities, with little physical activity to balance it out. As a result I was left feeling mentally and a little physically weary, and although I had lots of projects that I wanted to get on with, I found that I just couldn’t be bothered!! Enter Hornbeam ………….

Hornbeam is indicated where we have that “Monday morning feeling”; where we feel weary at just the thought of the day ahead and fear we may not have the energy to meet its demands; where we feel the need for a stimulant such as coffee to kick start us; life perhaps is too routine and lacks variety so we feel jaded; fatigue is more mental than physical. It can be useful, as in the example above, where a student has been glued to his books in preparation for an exam but has failed to balance the mental exertion with physical activity and fresh air. It can also be useful when our heads are buzzing from too much TV. Our spiritual vitality has faded, we are in a mental rut, but amazingly this weariness disappears instantly when something out of the ordinary happens, or something challenging enough is presented!!

A few drops in water, sipped throughout the day, can really help. The negative Hornbeam state can be temporary or more long lasting. If the latter, take at least 4 times a day for a week or two or until you feel more refreshed. It is also a good idea to support this with a break in routine, doing something out of the ordinary or a change of scenery, perhaps weaving in some daily physical activity.

Last count, I had 70 trillion and 2 cells. (Counting cells is a great antidote to insomnia.) When you think about it, that’s quite some population all living under the same roof (and quite some insomnia!!) all getting along swimmingly, and amazingly every one of them in tune with what’s going on at any one time. Our cells live in a sophisticated communication network. You have only got to think about stress (aargh!) to illustrate this. When there is a perceived danger, all the cells go into fight or flight mode, and will perform their own individual emergency drill so that the whole organism can live another day! Each has its own speciality: some will raise the blood pressure, some will create more energy, some will dilate the bronchioles etc. Whatever is happening, whether it is stress looming large, or a happy event, certain cells are manufacturing informational substances, despatching them in blood and nerves and the rest of the cells get a speedy notification and a call to action through their letterbox telling them what’s going on. For letterbox – read receptor site, at which an informational substance docks and unloads its message into the cell.

In health, the 70 trillion cells (and 2) sing from the same hymn sheet, they work and live in unison.

So what is happening in illness? Our cellular communication becomes faulty. Selfless cells become selfish; some become confused; some don’t even recognise their old buddies.

It has been said that in cancer, cells are acting selfishly. Instead of giving in to apoptosis (programmed cell death) the cells are somehow striving for immortality and crowding out their neighbours. In auto-immune diseases, immune cells attack self as they no longer recognise one of their own.

How can this possibly happen?

There is no doubt that these cells are no longer healthy. They have turned “bad”. But who can blame them? For years they have been subjected to an onslaught of toxins in their air, food and water. Toxins from toiletries and makeup absorbed via the skin have added to their load too. And let’s not forget the steady drip-feed of stress in our so called civilised 21st century world. Instead of getting on with their daily routine tasks of repair, growth and functioning, the cells have been jumping at the sound of the body’s alarm bell, throwing down their repair kits and putting all their energy instead into their emergency drills. The poor cells are no doubt exhausted! At the same time, they have not been provided with the resources (nutrients and water) to help repair them or clear away the toxicity. They have become more and more swamped in a rubbish pile by both external toxins and those produced by cell metabolism, to the point that they are drowning! Communication breaks down. They become fearful and selfish in order to survive.

I am not suggesting that an individual deliberately or consciously decides to get ill. Far from it. But when it comes to health, we do need to take personal responsibility. We need to take the reins of our own lives. We cannot afford to rely on governments and big food (and other) companies to do the right thing. They are not interested in our health. They are interested only in “£”s.

Just look at advertising. We are lulled into thinking that we can look sexy, young and healthy if we drink fizzy drinks, when in reality our bones are crumbling and our immune systems are compromised. Perhaps we are meant to think also that we will be able to run a 4 minute mile if we eat at MacDonald’s. After all it is the official restaurant of the Olympics.

Recently my own faith was shaken in my favourite supermarket (which will remain nameless though it has some nice green branding). They were reported to be stocking Monsanto products (a big company pushing for worldwide Genetically Modified (GM) foods!). When questioned they said that it was alright because the product was non GM and was produced by a subsidiary of Monsanto. This, as far as I was concerned, was giving the thumbs up, and holding the door wide open (with a big WELCOME sign over it) to a big corporation in favour of manipulated and dangerous “foods”. Eating these is like committing a slow painful suicide. As a result, I have lost faith in them, and they have lost my custom.

I invite you to take personal responsibility for your own health. Try minimising the toxins getting into your body and maximising the nutrients you eat and drink. This will go a long way to restoring the health of your cells and their communication network.

I know we cannot do much about the toxic chemicals in the air, nor for that matter have we much control over what is put in our water (except by investing in a good quality water filter) but we can be more discerning about our weekly shop! Get super-savvy! Question what is in things, read ingredients lists, refuse GM, ask yourself whether a product will nurture or harm each of your cells.