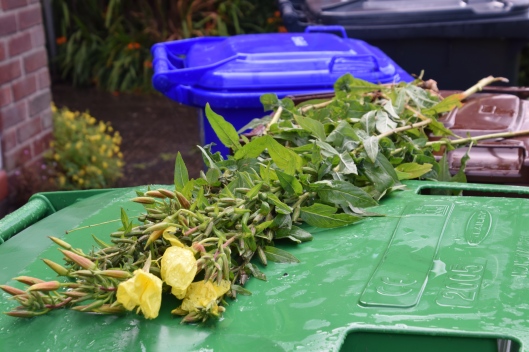 I’m currently clearing my mother’s old house. A sad time anyway, but even more so one day this week. Each morning, I have opened the kitchen curtains and been greeted with the cheerful yellow blossoms of the Evening Primrose which reside in a clump of clover in front of the garage. The other morning, my lovely Evening Primrose had been unceremoniously uprooted by a workman who had come to put up scaffolding for next door. We had given permission to use the drive for access. Without letting us know that he was starting, he had decided that the flowers would be trampled anyway so had just pulled them up. When asked, his answer was that he didn’t intend “tiptoeing round flowers” to do his work. I wasn’t so much angry as incredibly saddened. My friends (yes I talk to all the flowers) had been destroyed by a man who had shown no respect for another’s “property”, but even more so, shown no respect for the sanctity of nature.

It got me thinking later that day. When we put little value on something ourselves, or don’t see the bigger picture, how easy it is to dismiss something as unimportant. I’m sure he thought me silly for being so upset over flowers.

Why have I posted this under a topic of “trash”? Without thinking, I laid my Evening Primrose on the wheelie bins outside, and later I decided to take a photo of them.

It’s said that one man’s trash is another man’s treasure, but the opposite is true too, as was illustrated by this short event the other morning.