A month or so ago, I took my music-loving, 92-year-old neighbour, Eva, to visit Leith Hill Place, childhood home of Ralph Vaughan Williams. Set in the beautiful Surrey Hills, at the foot of woodland, this house is a step back in time, full of musical history and a haven from our crazy modern world.

Eva loved it. She recalled seeing RVW around Dorking (our home town) when she was younger; he sported a too long jumper and dishevelled hair!! Nonetheless, an amazing man who produced some breath-taking music, including the beautifully evocative “The Lark Ascending”.

My photos show a stunning tree with the most photogenic roots, beautifully set off by some recent rain ……… and a glimpse of Leith Hill Place, itself. 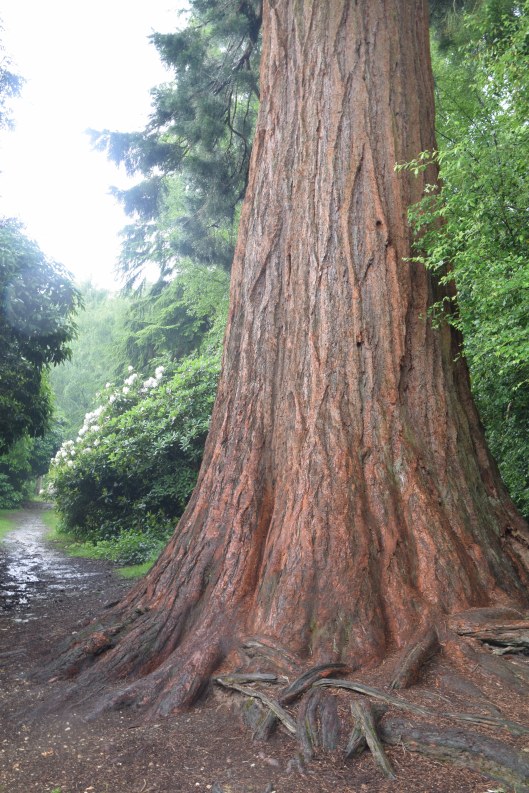 Recently two of my best friends each lost a parent, and inevitably it reminded of my own loss two years ago when my own Mum passed away. Since that day I’ve been thinking a lot about life. On the surface, I must look like I have gone back to normal, but deep down I know that I shall never be the same again.

When it first happened, I felt like I was operating in a surreal vacuum, weighed down with a heavy heart, whilst others’ lives continued around me at a crazy pace, like some dream sequence from a film. The earth kept on spinning, days still dawned over and over, and, to quote Eliot Ness in the Untouchables, “Some part of the world still cares what colour the kitchen is.”  The trivialities of day-to-day life suddenly seemed totally irrelevant.

As one would expect in a vacuum, joy was sucked out and mental function was dulled. Thankfully, mental clarity kicked in after the initial shock had subsided, but it took the best part of two years for my interest in life to be restored, and then only as a shadow of its former self. It’s not that I live under a cloud of depression. Far from it. It’s just that my once careless approach to life has been superseded by a more mindful existence, framed very much by life lessons.

For two years, I have rerun past scenes in my head. How I wish I had taken more time with Mum. How I wish I had done such-and-such but not something else. The realisation that I can never have those moments again feels like time wasted and brings with it a renewed sense of loss. It is indeed true that life is not a rehearsal. Each moment, each action, each decision, is the real thing.

Reflection too has given me better insight on my mother’s own grief many years before. Widowed at only 49 years of age, her only daughter (me) went to college seven years later, never to return, and just months after this, her own mother died. At an age barely above mine now, she had suffered incredible loss and would live on her own for her remaining 37 years. Recently, whilst I was grieving for my own loss, I found myself not only stepping into her shoes, but grieving for all her losses too. At long last, I understood how her life experiences had shaped her views and character. It made me realise so much about this woman who I had known only as my mother. It was then, whilst looking at life through her eyes, that I could forgive her all the silly things which I had perceived to be “wrong”. It was then too that I started learning to forgive myself for not being fully present all those times in the past, for it was only in loss, that I had started to appreciate the true value of every moment.

Don’t take anything for granted.

It’s not a rehearsal.

Appreciate each moment, including the small and the big things.

Appreciate all the lovely people in your life.

Give these people your time.

So too is the time you spend with them.

The colour of your kitchen does NOT matter.

For the last few weeks I have strayed from my roots – i.e. Nature, so this week, thought that I would see what Mother Nature has to offer in the way of yellows.

Not my favourite topic but I’ve tried to keep well away from creepy crawlies !!

I’ve started off with a link back to my post for last week’s HISTORY challenge, and included a couple more photos of Manchester bees (taken in the Town Hall), a symbol of industry and hard work.

Then I’ve gone outdoors for some natural bugs ………..

And finally, my favourite. When I read the topic, my first thought was “The LOVE BUG”. I’m old enough to remember the 1968 film by this name about an anthropomorphised white VW beetle. It made a big impression because my parents had one from between 1963 and 1982. I learnt how to drive and passed my test in our Herbie, and I have a big soft spot for these cars still.  The photo was taken sometime around the same year as the film. 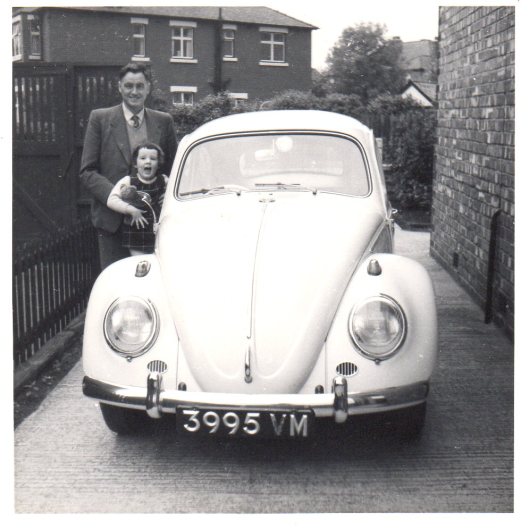 I’ve just spent a couple of weeks in my beloved Manchester (UK) which is brimming with history – even a little Roman, though this isn’t my personal cuppa tea (sorry Frank!). Whilst here I have been on two guided tours, one of which was of the Town Hall, so I thought I would include a little bit of history gleaned from that.

Manchester Town Hall stands in Albert Square (1st picture), and was designed by Alfred Waterhouse, who was also responsible for The Natural History Museum in London. The Town Hall was officially opened in September 1877.

It backs onto another of Manchester’s well known squares – St Peter’s Square (famous for the Peterloo Massacre of 1819, considered by many as a cornerstone of parliamentary reform.

We have two other buildings in this square worthy of mention. As the eye sweeps across the square from left to right, one sees  – The Midland Hotel (built at the tail end of the 19th century), Central Library (opened 1934) and then the Town Hall.

These are all shown below ……. 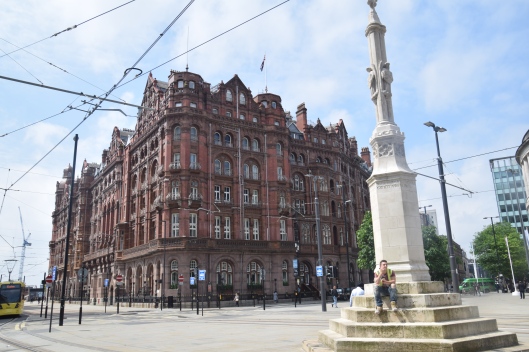 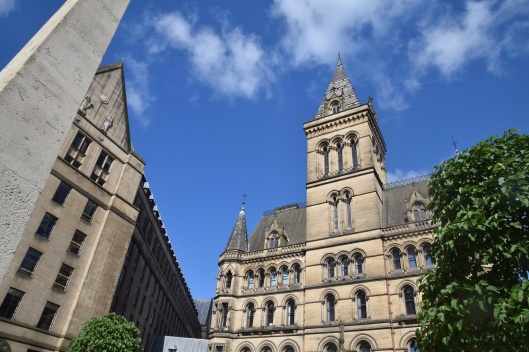 I appreciate that not everyone gets excited by Victorian (and later) architecture, but here comes the interesting bit (well I thought so!!). Manchester was heavily bombed during WW2, but both these squares escaped. Why? Hitler had earmarked the Midland for living quarters and the Town Hall for admin, when he invaded England, which thankfully never happened.

Out of the frying pan into the fire, however, for in 1945, having escaped such a fate, the council proposed razing the Town Hall and environs to the ground to build a new “improved” city. In 1951 a Tory government came into power, and thankfully did what they are best at – made cuts, so the said redesign never happened. (For anyone in the UK, you’ll hopefully appreciate that such cuts did have their advantages then!!) 🙂 🙂 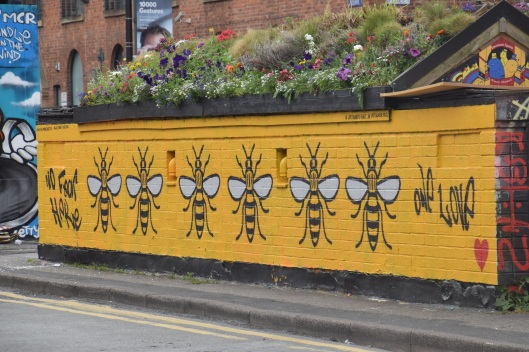 The Manchester Bee is everywhere since the atrocious bombing last month.