Frank, whose fab blog is “Dutch Goes the Photo”, has set “STRUCTURE” as the topic for this week’s Photo Challenge.

One of my passions is for architecture. I don’t know a lot about the subject but I do know a good building when I see one!!

Manchester, UK is full of interesting buildings so I was rather spoilt for choice as to which photos to choose. I decided to show a few of Victoria Baths, because they showcase two different sorts of structure.

The first is the actual building itself, a robust but beautifully constructed brick structure, opened in 1906. It had a strong purpose – as municipal baths – but it must also have delighted the senses as it was highly decorated with mosaics and stained glass, and boasted Turkish Baths too!

The other structure is that of hierarchy. It was designed when women were deemed to be second-class citizens.  In fact, not even that high!!! There were separate doorways for “Males First Class”, “Males Second Class” and finally “Females” (gee thanks !!). Entrance was the least of the insults. The women’s pool was graced not with fresh water, but water which had first been used in each of the men’s pools. Health and safety had yet to be invented!!

For some reason, I don’t have a picture of the building in its entirety outside, just the doorways. Mmmmmmmmm – I feel an expedition with my camera to explore further coming on …………………… 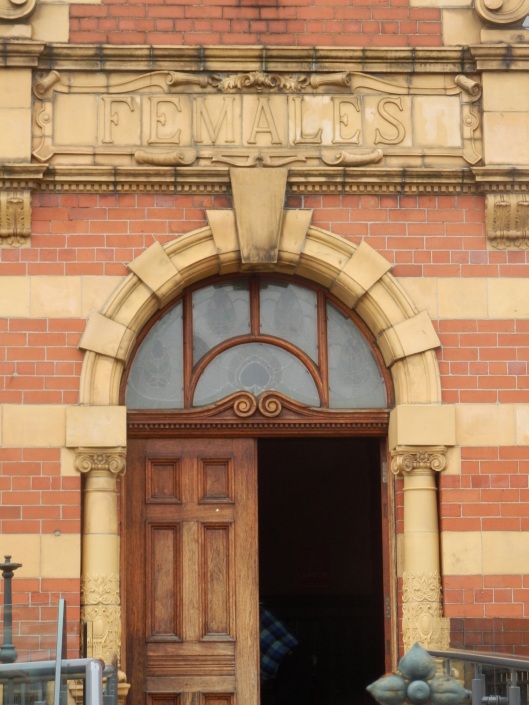